How to Fix a Leaking Tap

A leaking or dripping tap is one of those annoyances that every now and then comes along to keep us on our toes and test our DIY maintenance skills.

If you are more of a novice then perhaps knowing where to start to resolve the issue can seem like a mind field but don’t despair our simple to follow Building Supplies Online ‘how to fix a leaking tap yourself’ guide is here to assist you along the way.

When you identify a leaking tap, try to fix the problem as soon as possible to prevent water damage on surrounding surfaces and walls as well as preventing too much water being lost resulting in wastage and higher bills if left for a significant amount of time.

You will need the following tools to fix your leaking tap: 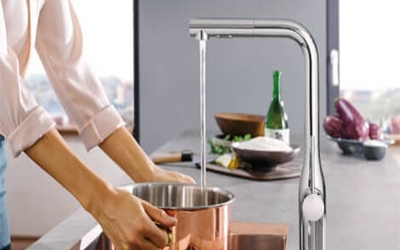 Firstly, you will need to identify the type of tap you have as this will determine how to rectify the leak.  The main two types of taps are Traditional and Monobloc (newer) taps (Monobloc taps control both temperature and flow of water from the tap with the movement of one handle). The cause of traditional taps leaking is often because the rubber washer has eroded and needs to be replaced which is simply replacing a rubber washer.  With monobloc taps, the cause may be because of its unique ceramic cartridge needing to be replaced.  The ceramic cartridge would usually need to be pre-ordered from a retailer however this only needs replacing usually every 12-15 years.

Before starting to rectify the problem the most important thing to do is to:

A good tip to prevent your washers from wearing out so often is to not turn your taps too tightly when turning your taps off as this puts strain on to the washer itself allowing them to give a way each time.

At Building Supplies Online, we stock a large range of tap accessories for any job big or small at competitive prices and fast delivery.